Apple cinnamon rolls are soft, gooey treats made for fall weekends and holiday mornings, like Thanksgiving and Christmas. We start with a classic homemade cinnamon rolls recipe and upgrade it with the addition of fresh apple pieces and a decadent vanilla bean cream cheese frosting.

Does making cinnamon rolls from scratch sounds like too much work for an early morning? Check out my tips for making these as overnight cinnamon rolls instead. Nothing beats the indulgence of a sweet, homemade, apple cinnamon roll for a special occasions.

Originally appearing on the blog in November 2015, the recipe was last updated in September 2019.

As a child, nothing beat rolling out of bed on a chilly holiday morning knowing that mom had cinnamon rolls waiting in the kitchen. The soft, gooey dough, sweet spiced filling, and decadent cream cheese frosting were always a welcome treat.

While these are not the cinnamon rolls of my childhood, I dare say they are better. Afterall, these are homemade cinnamon rolls from scratch! I know what goes in them and I think that the extra work involved means I earn my indulgent treat.

These apple cinnamon rolls start with a yeast dough, are filled with a layer of sweet, spiced, apple filling, then topped with a homemade cream cheese frosting. Rich, buttery, and indulgent, they are a classic way to kick off your holiday celebrations.

Making apple cinnamon rolls from scratch is not a quick or easy process. You have to make the yeast dough. Let it rise. Make the filling. Assemble the rolls. Let them rise again. Make the cinnamon roll icing. Bake the rolls. Then wait for them to cool enough to touch while being tortured by the heavenly aroma of fresh bread and baked cinnamon.

It’s a complex process and not for the faint of heart. However, if you are only doing it once or twice a year for special occasions it’s totally worth it! Also, my tips and tricks will help you get it done right the first attempt, making it that much easier to include it as an annual tradition.

The dough we are using for these apple cinnamon rolls is a modified brioche dough made with instant yeast. The egg and butter give it a rich texture that makes these rolls taste extra decadent. The instructions in the recipe card are detailed, but there are a few things to consider.

First question: do you trust your yeast? I recommend instant yeast, which does not HAVE to be proofed, but I recommend proofing it anyway. Why? If your yeast is too old or was improperly stored, it may not do its job. I’d rather find out at the beginning, than after an hour of work. Want the long story and to learn more about working with yeast? See my English Muffin Bread recipe or my Homemade Pita Bread recipe.

Do you have a stand mixer or do you prefer to work off your indulgences before you enjoy them? Mixing and kneading the yeast dough by hand is totally doable, but it takes extra energy and extra time.

This is one recipe that makes me happy to pull out my stand mixer. The image of dough below shows it after adding enough flour to make it stop sticking to the bowl, but before kneading.

Tips for a Faster Proof

Allowing enough time is important. The dough has to rise twice. Once in the form of a dough ball and again in the form of cinnamon rolls. The actual timing depends on the ambient temperature of your kitchen and can only be estimated.

If you want to speed things up, use your oven as a proofing box. If your oven has proofing settings, set it to 200º, You can also heat your oven to its lowest temperature – typically 250ºF, turn it off, then place the dough inside. Either of these methods should cut the suggested proofing time in half.

Also, you don’t have to be an early riser to enjoy these rolls fresh from the oven. Check out my tips below for overnight cinnamon rolls to see how to break this up into a two day project.

The filling for these apple cinnamon rolls is a combination of butter, brown sugar, spices, and diced apples. For the most even coverage and best filling to dough ratio, I add the filling in three parts: room temperature butter, then the the brown sugar and spice mixture, then the chopped apples.

While it’s tempting to start the filling while the dough rises, if you chop the apples too far in advance they will brown. To speed things up, wait the first hour and see how your dough is doing. If it’s doubling quickly go ahead and start the filling. However, if it’s a slow rise kind of day, wait a little longer to start the filing.

After the first rise, when the dough has doubled in size and has a puffy, soft appearance, punch it down (it will deflate), then roll it out. When rolling out the dough, make sure you are working with a well floured surface.

Roll and stretch the dough into a rectangular shape that is about 1/4 of an inch thick and just larger than 18′ by 12′. While an exact rectangle is not required, it helps to gently stretch the corners by hand to get them into place.

Before adding the filling, make sure your dough isn’t sticking to the surface. Brush on the melted butter, then sprinkle on the brown sugar and spice mixture. Follow this with the diced apples.

Working with the long edge, gently roll the dough in on itself so that you have a log that is roughly 18″ long. Once it’s all together, flip it so that the seam side is down.

Use a very sharp knife, let the knife do the work to slice the cinnamon rolls without mashing them down. Instead of working from one end of the roll to the other, I use a kitchen measuring tape as a guide and divide the sections starting in the middle.

Start by cutting the long roll into half, then cut each half into half. Take each quarter and slice into thirds. This trick increases the chance that you will get an even 12 rolls that are uniform in size and will bake evenly.

Place the rolls into a buttered 9″ by 13″ pan with the smallest rolls on the inside. Typically, these are the rolls from the end of the log. Placing them in the middle will prevent them from cooking too quickly compared to the other cinnamon rolls.

If you want to enjoy apple cinnamon rolls for an early breakfast, it’s super convenient to make overnight cinnamon rolls. Once the rolls are assembled in the baking dish, cover the pan and place it in the fridge overnight. The next morning pull them out and let them rise one hour in a warm spot before baking.

The fridge stalls the yeast, and some argue it helps the flavor of the dough further develop – similar to proofing pizza dough for up to 72 hours. I haven’t done a side by side taste test, so I’m not sure, but I have refrigerated mine for about 12 – 14 hours with good results.

If you want to bake them today, cover the assembled cinnamon rolls with a clean kitchen cloth and place them in a warm spot for the second rise. Since the dough is already warm, or at least at room temperature, this second rise should only take 30 – 60 minutes.

You’ll know they are ready to go when the dough has expanded enough for the rolls to fill the pan. Once risen, place them into an oven preheated to 350ºF. Bake until the tops turn a beautiful golden brown color and your house smells like a bakery.

An apple cinnamon isn’t a truly decadent indulgence without the vanilla cream cheese icing. The icing is fairly simple, but you do need to let the cream cheese and butter come up to room temperature for the lightest fluffiest results.

I set my ingredients out when I start the recipe, then make the icing while waiting for the rolls to bake. When doing these as overnight cinnamon rolls, I do the icing the night before to minimize the mess and the work in the morning.

If cream cheese icing isn’t your thing, you can opt for a drizzle of bourbon butterscotch sauce, powdered sugar glaze, or a light dusting of just powdered sugar. The choice is yours.

We are a participant in the Amazon Services LLC Associates Program. As an Amazon Associate I earn from qualifying purchases. Check out my Amazon shop to see all of my recommended kitchen tools.

If you are looking for other tasty ways to kick off your holiday mornings check out my Banana Waffles, Vanilla French Toast, or see all my breakfast and brunch recipes.

If you like this recipe, please give it a FIVE STAR rating and share it on your favorite social channel!

*Any apples of your choice will work. My favorites are honeycrisp, granny smith, braeburn, and jonagolds.

To make these into overnight cinnamon rolls, follow the directions through step 13. Cover the baking dish with a lid or with foil and place in the fridge overnight.

Remove early and let rise at room temperature for 1 - 2 hours. To speed this up, use the proof settings on your oven or preheat the oven to 200ºF, turn it off, then place the rolls inside for 30 minutes to an hour to rise.

Once the rolls have doubled in size, bake according to step 15.

Nutrition information is automatically calculated by Nutritionix and is for general information purposes only. For the most accurate information, calculate using your select brands and exact measurements.

Did you make this recipe?

For the step by step version of this recipe, check out the How to Make Apple Cinnamon Rolls Story.

More Posts by this author. 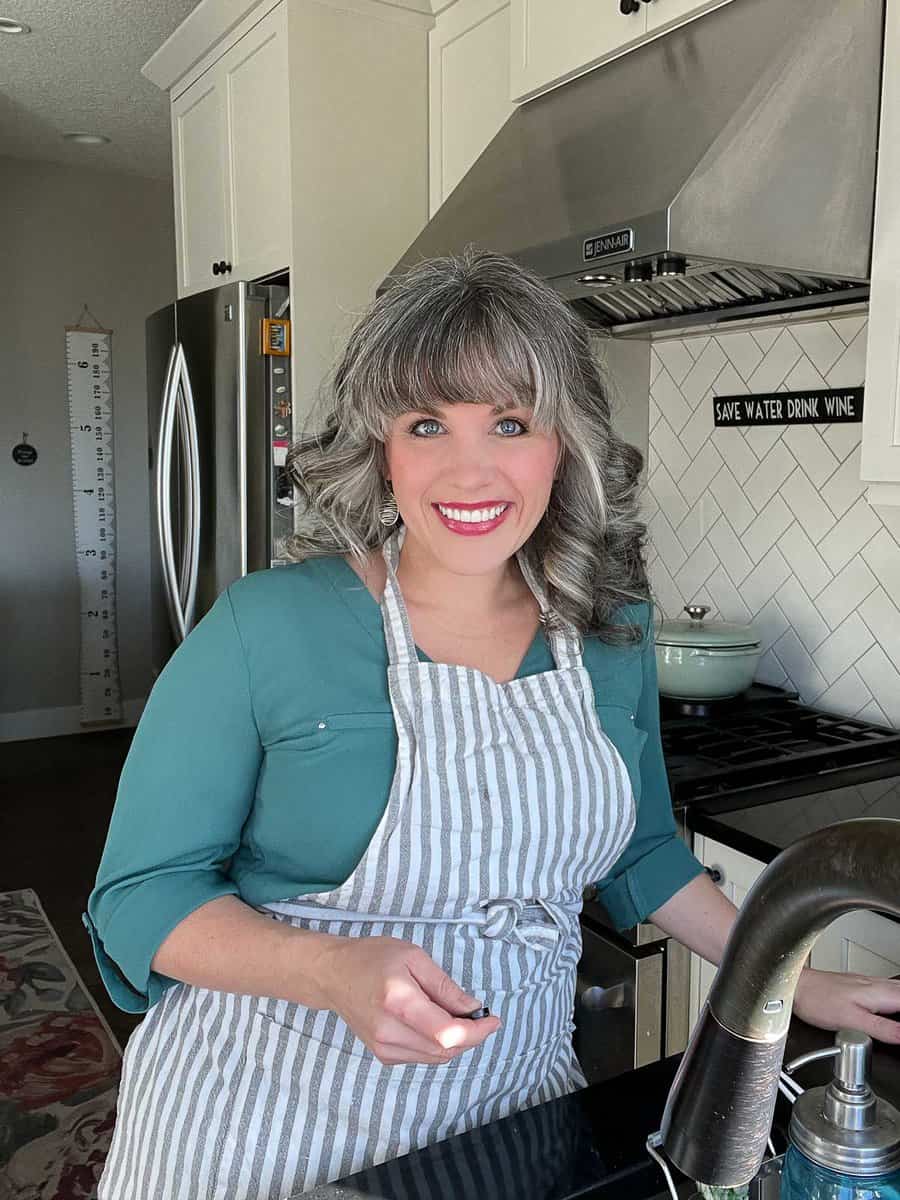